Recently I wrote a blog post on why software developers are typically so bad at estimation. I also gave a preview of the presentation that I am giving today to the Agile2010 conference on how to combat some of these problems by building range estimation techniques into a Scrum burndown. You can see that slide deck on slideshare.

To briefly recap, I pointed out that Agile team estimation and Planning Poker (or Scrum Poker) is great, but one big problem I have with it is the reliance on single point estimates in the burndown.

That’s why we have built range estimation into our Scrum Poker and burndowns at OpenSource Connections, and we find it to be more effective. By holding two cards instead of one, each team member is indicating a range estimate and communicating lot more about the risk and complexity that they see in that project.

So how does it work? In this blog post I’m going to describe how we do it using Google Spreadsheets.

How to build a burndown using ranges

In the end, we come up with a burndown similar to this, which represents the low and high estimates, and is a representation of the risk of the sprint or as a band of acceptable divergence from the estimate. 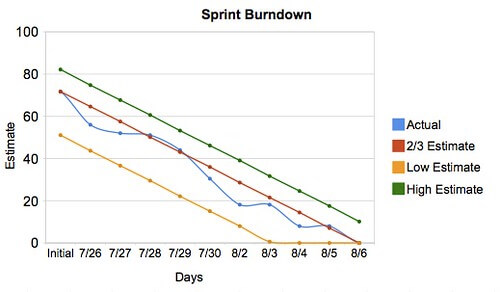 Make Google Spreadsheets (or Excel) do the Hard Work!

The next thing to show is how we represent this in a Scrum spreadsheet, and derive the formulas to build that pretty burndown. The vertical image is an example scrum spreadsheet like we use at OpenSource Connections, and the following sections will describe the major formulas being used in that spreadsheet.

This is a little tricky the first time, but then just copy the sheet from then on.

Low Estimate (D6-D8) and High Estimate (E6-E8) are entered by the team as they agree on estimates for each task in sprint planning.

Then developers update estimates each day as usual, and this makes the “Actual” line in the burndown.

That’s really all there is to it!

Once you’ve got your spreadsheet setup, you can just copy it from sprint to sprint, and then it really doesn’t take any more time in sprint planning to use ranges instead of single points. But using ranges with a 2/3 weighting like we do will help force your team to think a little more about the risk involved in their estimates and to estimate more conservatively. This allows you to better communicate with your customer and more reliably predict what you can commit to in a sprint.

*Arin Sime is a Senior Consultant with OpenSource Connections, specializing in Agile process consulting, Solr search, and development consulting. You can follow Arins tweets at ArinSime *