Making Ubuntu 12.04 not crawl in Virtualbox

So I’ve got a new hooptie laptop (a pimped out Sager NP9170). Since I’m pretty much changing everything about my career, I thought I’d stick to one thing staying the same – I’ll stay with a Windows PC (specifically Win 7 x64 sp1). Traditionally when I need to do Linux dev in this kind of environment, I’ve loaded up Ubuntu in VirtualBox. It typically works really well. The number of glitches I have to work through tend to be really few compared to a direct Linux install. Mostly cause I’m not trying to force Linux to run on a bunch of hardware it’s probably missing support for. I have all the power of Linux and all the device support of Windows, woohoo! And I can easily do Windows dev at the same time, double woohoo! Anywho, a few things have changed since the last time I got this setup working: 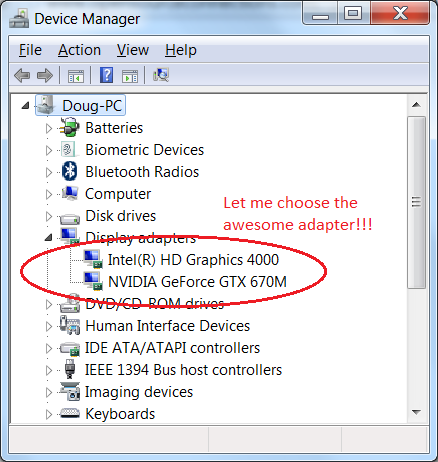 On a whim I wanted to see if anything was awry in the host’s video card settings. Right-clicking on the desktop and selecting “screen resolution” and then “Advanced Settings”, I noticed right away that the the graphics adapter was listed as “Intel HD Graphics 4000″. Not the beefy Nvidia 670M I have installed. I thought a return of my laptop to Sager was definitely going to happen. As far as I could tell, for some reason the Nvidia that had come with my Sager was not operating. I attempted to delete the Nvidia from device manager and rebooted, hoping it would “reinstall” correctly. I attempted to delete the integrated graphics card, which was pretty stupid. Thankfully Windows booted in CPU driven graphics mode and saved my butt.

After some research, I was lucky enough to stumble on this SuperUser question with a screenshot that looked eerily familiar. What I learned was that Nvidias souped up laptop graphics card had something called “Optimus” built in. Optimus auto-selects between the low-power integrated, Intel graphics card and the fancy-schmancy super accelerated but power-hogging Nvidia card.

I followed this video to tweak Optimuss settings on a per-application basis. The trick is to set the graphics card to be used for VirtualBox. You can also set what graphics processor to use in the Nvidia control panel under “3D Settings” -> “Manage 3D settings”. Select the “Program Settings” tab and hit the “Add” button to add the VirtualBox executable. Then under bullet 2, select the High-performance NVIDIA processor for VirtualBox. 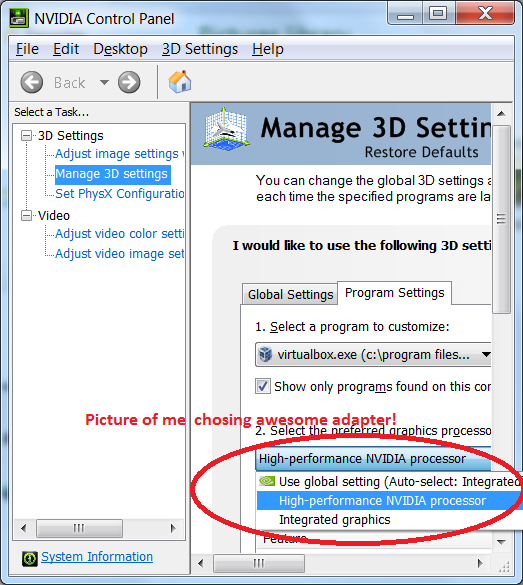 Once I did this, I now get great performance with VirtualBox in full screen. To sum up, to get ideal guest OS performance I followed all these steps: Via VirtualBox Manager:

Voila! You have the latest Ubuntu Unity hawtness working flawlessly as a guest in Windows!

At OSC we empower the world’s best search teams – if you have a search engine project using Apache Solr or Elasticsearch and you’d like our help tuning relevance or performance, get in touch!