BM25 The Next Generation of Lucene Relevance

There’s something new cooking in how Lucene scores text. Instead of the traditional “TF*IDF,” Lucene just switched to something called BM25 in trunk. That means a new scoring formula for Solr (Solr 6) and Elasticsearch down the line.

Sounds cool, but what does it all mean? In this article I want to give you an overview of how the switch might be a boon to your Solr and Elasticsearch applications. What was the original TF*IDF? How did it work? What does the new BM25 do better? How do you tune it? Is BM25 right for everything?

BM25 and TF*IDF sit at the core of the ranking function. They comprise what Lucene calls the “field weight”. Field weight measures how much matched text is about a search term.

Classic Lucene Similarity: What is TF*IDF?

TF*IDF is a rough way of approximating how users value the relevance of a text match. The intuition underlying TF*IDF is pretty straight-forward and relies on the two principal factors embedded in the name of the scoring formula that tend to correspond to how human minds tend to evaluate search relevance:

In other words, TF*IDF measures the relative concentration of a term in a given piece of text. If “dog” is common in this article, but relatively rare elsewhere, then the TF*IDF score will be high. This article ought to be thought of as very relevant to the search term “dog.” If “dog” occurs once here, but very prominently in many other docs, its score will be relatively low.

One additional measure is the text’s length. “Dog” occurring twice in a 500 pg book says almost nothing about how much that book is about “dog”. “Dog” occurring twice in a short tweet, however, means that tweet is very much about “dog”! Thus an additional bias is introduced called “fieldNorms.” This contribution gives a significant bias towards matching shorter documents over longer documents. The terms are more “concentrated” in the shorter doc, therefore that shorter doc is much more likely to be about the searched-for term and thus should be scored higher.

Through constant experimentation, the field of Information Retrieval (the academic side of search) has realized that raw TF IDF values don’t quite correspond to user intuitions of relevance. If an article mentions “dog” six times is it twice as relevant as an article mentioning “dog” 3 times? Most users say no. Sure the article that mentions “dog” 6 times may be more relevant, but not twice as relevant. Similar considerations come into play for a term’s IDF. A term occurring in 500 docs is not twice as special as a term occurring in 1000.

Instead, TF*IDF is modified so that TF, IDF, and field length aren’t taken directly. Instead of TF directly, sqrt(TF) is taken in the scoring formula. Documents with twice the number of terms as another document aren’t twice as relevant. Instead you get a TF score computed as follows

Similarly users don’t consider terms that only occur in 10 documents ten times as special as those that occur in 100 documents. Instead, the IDF score is computed as

Here numDocs is the number of documents in the corpus. For, say numDocs=1000, this corresponds to::

What about the impact of a document’s length? How does that computed? This is computed based on another simple formula that also seems to work with user expectations:).

The overall formula is

Enter BM25: The Next Generation of TF*IDF

Instead of getting lost in very fascinating theory, I’d rather discuss intuitively how to use BM25. You’ll see the shape the ranking takes, while scary looking mathematically, actually makes a lot of intuitive sense.

Ok first, let’s get IDF out of the way. On a graph, BM25’s IDF looks very similar to classic Lucene IDF. The only reason for the difference here is its derivation from probabilistic information retrieval. Lucene makes one change to BM25’s regular IDF. BM25’s IDF has the potential for giving negative scores for terms with very high document frequency. So IDF in Lucene’s BM25 does this one amazing trick to solve this problem. They add 1 to the value, before taking the log, which makes it impossible to compute a negative value. The end result is an IDF that looks extremely similar to Lucene’s current IDF curve, as shown in the following graph. 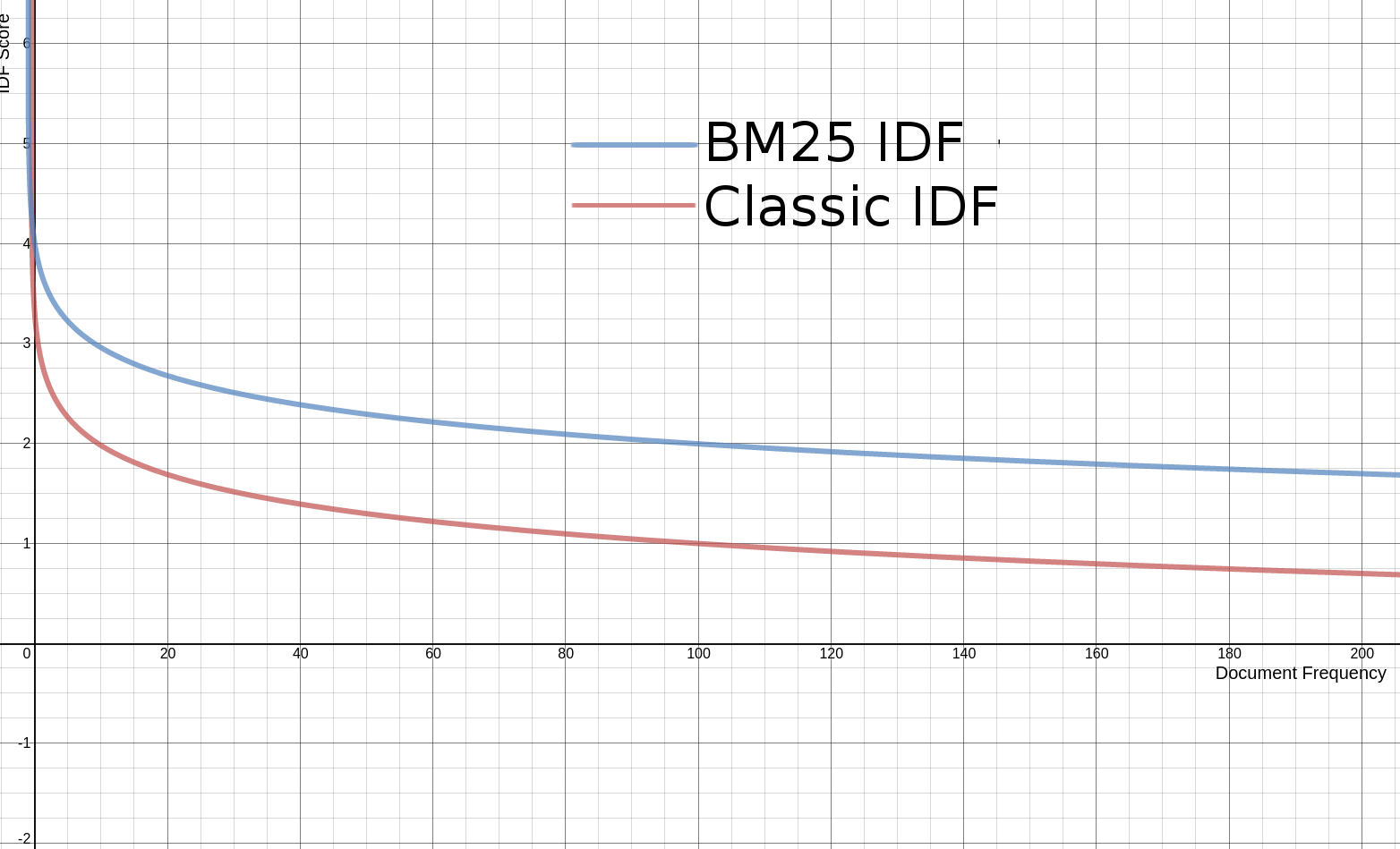 So for IDF, not a lot of surprises. We don’t need to alter our thinking about IDF in BM25. What’s more fascinating if you see (again outside the scope of this post) how IDF is derived from probability theory.

Without any consideration for document length, term frequency follows the formula 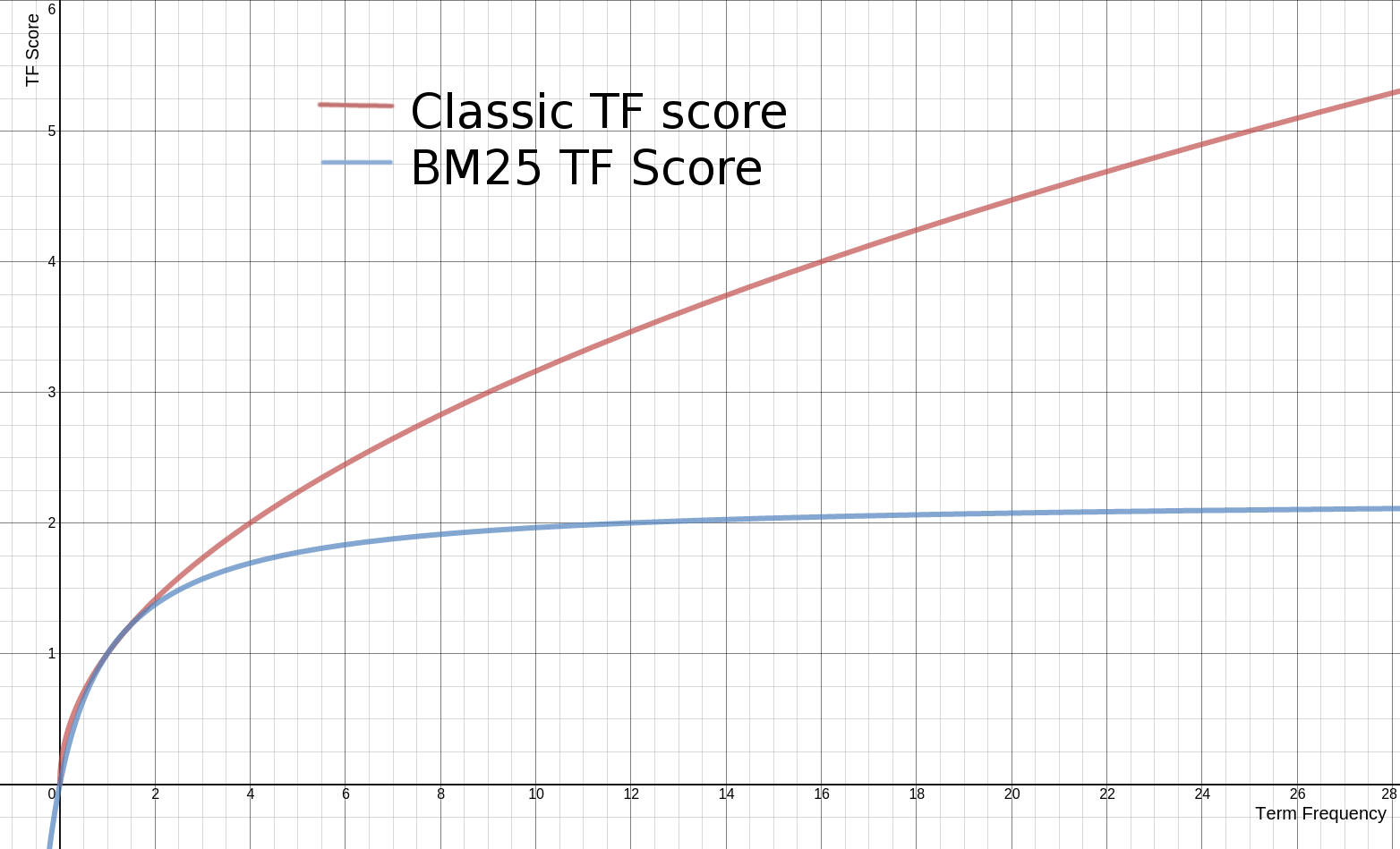 As you can see, this curve approaches (k + 1) asymptotically (here k=1.2). It has a really interesting effect. More tf always means more relevance. However you quickly hit diminishing returns. You never get past k, but you always approach it! Classic Lucene tf, on the other hand, constantly increases and never reaches a saturation point.

What is this k value? For BM25, k is often set to 1.2. Most leave k alone. Changing k though can be a useful tuning approach to modify the impact the TF. Modifying k clearly causes the asymptote to move. However what’s more important is that a higher k causes TF to take longer to reach saturation. By stretching out the point of saturation, you stretch out the relevance difference between higher and lower term frequency docs!

How Does BM25 Use Document Length?

Now the last section was a bit of a useful lie. The TF score above is further influenced by whether the document is above or below the average length of a document in the corpus.

What does this look like? Well let’s built on the TF formula from before, introducing two variables: a constant b and a length value L. Taking the formula above and adding (1.0 - b + b * L) as a multiple on k in the denominator. 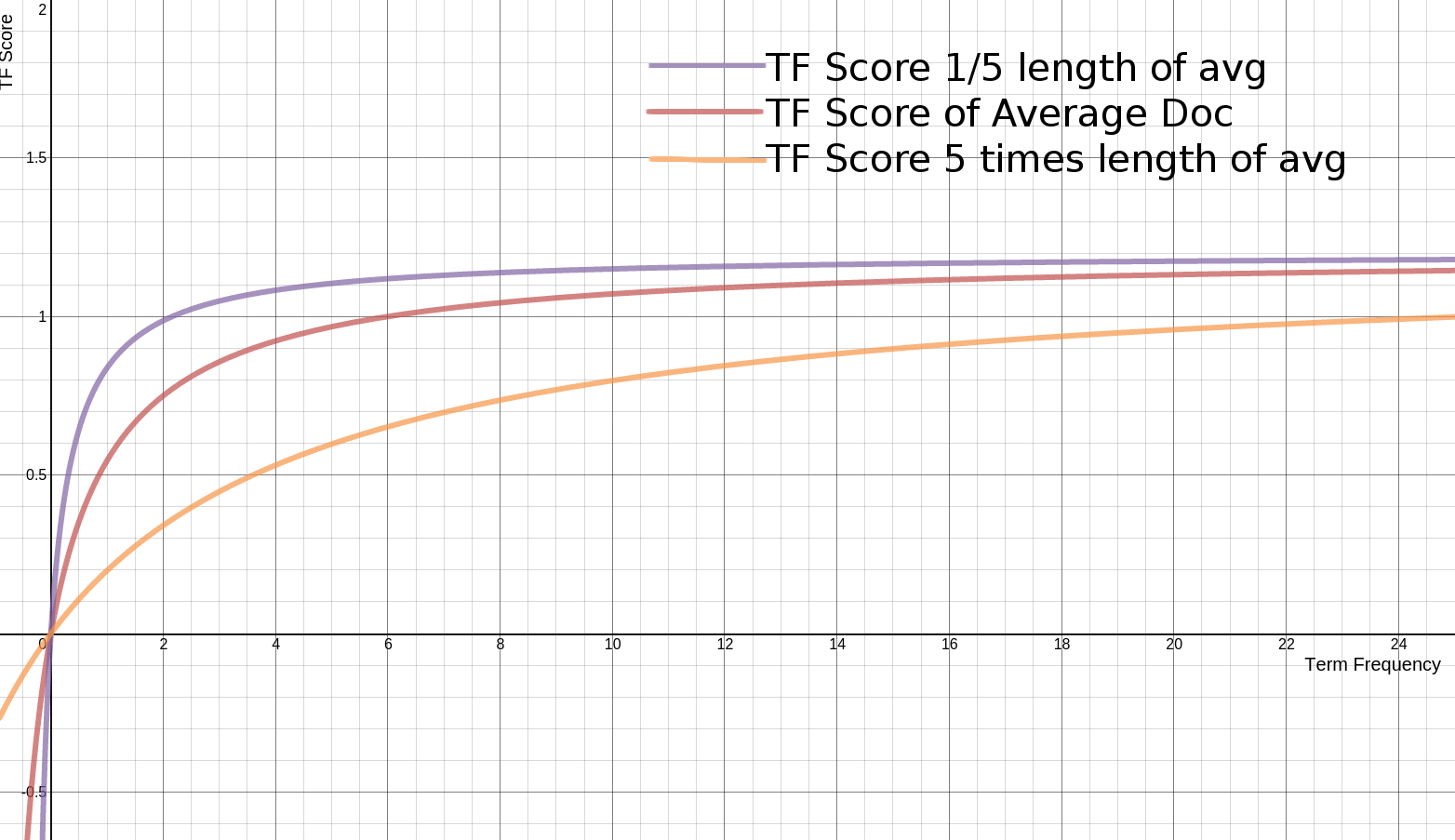 As you can see in the graph, the end result for different values of L is that shorter docs hit the asymptote much faster. They saturate nearly right away to the best possible TF score. This makes sense, short documents have fewer terms. The more matches in these short docs, the more certain you can feel confident in the relevance. So the number goes up quicker. A lengthy book, on the other hand, takes many more matches to get to a point where we can feel confident. So reaching “max relevance” takes longer.

The constant b will allow us to finely tune how much influence our L value has on scoring. Notice in the formula above, a b of 0 completely removes the influence of L, returning to the formula of the previous section. A higher b adds more document length influence on the scoring. In other words, in classic TF*IDF you always disabled norms on a field to remove the influence of field length. Here you can simply set b to 0 on the similarity to remove the impact of field length.

When BM25 is taken all together:

You can see why we started from square one here!

Will BM25 be appropriate for everything?

I’m really impressed with BM25. I used it on the O’Reilly Library project for searching book chunks. There’s a lot of wisdom here! Term frequency saturation makes a lot of sense. So does modulating the influence of the field length.

But they continue to make sense for article-length pieces of text. Not everything we search are blog posts or wikipedia pages. The similarity being used needs to change based on the kind of thing you are comparing. Title fields, for example have their own wonky proclivities. Indeed hosted search services Algolia and SwiftType make their business in part on being really really good at short snippet search.

So as my buddy Alex from Solr Start asked me – is BM25 right for everyone? For everything? It’s a huge improvement on the core document search problem. But around the edges for numbers, images, and other entities being searched the win is not clear.

This is a fascinating time to be a Lucene, Solr, or Elasticsearch developer. With BM25 becoming the default, we’re going to see directly what happens when theory meets practice. Relevance is never a constant, it’s a user experience you’re crafting. Yet the cauldron that BM25 came out of is information retrieval competitions like Trec and the like. The real world can be so much different. Documents aren’t just documents but restaurants, products, news articles, tweets, doctors’ offices, and many other things. Maybe the right answer for your “similarity” is to always bring up tweets tweeted by friends, nearby with similar interests. Less about text similarity, and more about what’s important for users to find. In other words, search is just as much about crafting a user experience as anything else. That’s why we’re excited about Quepid to help understand the user expectations from search!

Anyway, I’m thoroughly excited about the possibilities of BM25. It opens doors in Lucene’s baseline relevance capabilities and is going to really open a lot of doors for Solr and Elasticsearch capabilities! If you’d like to chat about whether BM25 or another relevance solution is right for your application, please contact us!

Did you know we offer training courses in how to tune relevance for Solr and Elasticsearch based search engines?