So, is James Bach (@jamesmarcusbach) the bad boy of testing?

I flew up to Boston on Monday to lead some workshops on Continuous Integration. I checked into my room at the Hyatt and then went downstairs to see who was around. I ran into a couple of speakers milling about, and eventually joined one of them, and we headed over to the MIT Press bookstore, me to look for my Solr book. I wasnt too sure of the name of the other speaker I was with (I asked once, but couldnt quite remember what it was…). So we got to the book shop, I ask my fellow speaker again: James Bach. The name I was familiar with, but couldnt quite place it… I ended up buying Parentonomics, and then we go for coffee.

So, over coffee, he asks me about what my topic is, and I gave him the brief summary of my two CI related workshops. Wow.. Little did I realize that I was sitting with the guy who rails against the “fetish” that Agile folks have for automated testing! That his entire approach to “testing” is to use skilled, motivated folks who do “sapient testing”. And Im the guy whos selling an approach that REQUIRES automated tests! That encourages expanding the use of automated testing!

He actually walked me through a process of talking about how to “think like a tester”, and it was really great mini-workshop.. He definitely subscribes to the socratic approach, and believes in his message, I was sweating at the end of it! That chat probably sparked more ideas in less time over that coffee then anything else this week. I also heard a lot of ideas and phrases that were echoed in Michael Boltons keynote later on in the week. Clearly a lot of collaboration between the two!

Probably the biggest idea that James and chatted about was the idea that automated tests really arent automated tests, they are automated checks. They verify that the expected behavior of the code was met. His argument that if you want to do testing, real testing, then computers, automated processes cant meet that need, only people can.

Now, I dont know if I believe that is completely true, but I am very aware that the “manual testing” where long test scripts written as Word documents are executed by human beings by hand are really a waste of human potential. And that those test scripts are really, to use James terms, “check scripts” because the people are not using any creativity! In fact, a lot of my interest in CI comes from the idea that people should not do monkey testing, that machines can do it much better, and my frustation with the perception that testing is a low value activity and can be easily shipped off to low skilled folks.

I think that this shift away from the term “test” for automated tests is actually happening in many places. In the Ruby world, we have libraries like Shoulda that are moving from using words like assert to other words like should. A Cucumber test really shows how controlled the space that a test needs to be to work well in an automated fashion:

Scenario: See all vendorsGiven I am logged in as a user in the administrator roleAnd There are 3 vendorsWhen I go to the manage vendors pageThen I should see the first 3 vendor names

So while I dont know if I am bought in on the idea that only people can do “testing”, and machines can only do “checking”. Tools like Heckle try to simulate aspects of what a human can do. While not suggesting that we can automate the “does my website look okay after someone changed the CSS” type of work today, in the future our automated testing will be more capable then just “checking” because we will move beyond the very constrained tests we have today to ones that mimicing the richness of the simulators that Airline Pilots use. Instead of testing the training given to pilots, well be testing the robustness of software via simulations!

At any rate, James Bach, while taking a rather provocative approach to sharing his ideas, does subscribe to my favorite bullet in the Agile Manifesto: Individuals and interactions over processes and tools.

Here is him giving a great presentation with the subversive title of “How to Fake a Project” that was incredible entertaining, and also quite thought provoking: 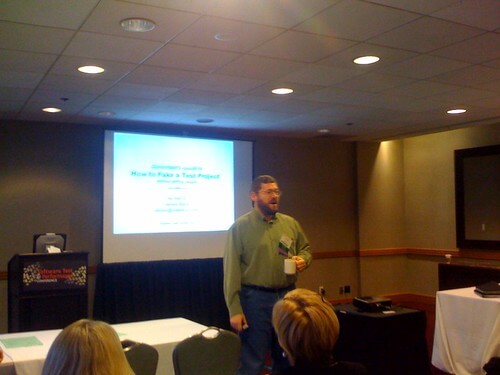 What do you think? Automated testing is a fetish of the Agile community?